So Many Activities, So Little Time!

The month of August has been a whirlwind of fun races and exciting volleyball.

My husband and I participated in the Squaw Creek Army challenge which was a 5k with obstacles and a LOT of mud.  We were so, so stoked to run this race!  I'm fairly certain they did not have enough volunteers, at the beginning the timing chips weren't properly working and the heats kept getting pushed back.  We were supposed to run at 10am and didn't hit the course until 11:30am.  We chose to do the "fun" run this year but next year we plan on participating in the competitive race so we can start earlier and hopefully will have a better experience.

It was a lot of fun, don't get me wrong but standing in the hot sun for so long and then waiting about half an hour in line at some obstacles was frustrating.  It was definitely a tough course full of big hills, muddy trails, huge hay bails to cross, wooden planks, walls to climb and repel over, culverts to crawl through, swamp to swim through and a wicked slip and slide at the end.  I didn't even bother to see what my time was, pretty sure I spent more time in lines than I did actually running.  We did have fun though! 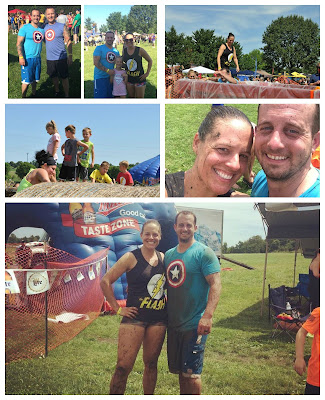 After the run we went home and took a nice nap :)  Then we were headed to the Glo Run, our daughter Bella was super excited for this race.  I LOVE that she wants to do these activities with us, we have so much fun doing them as a family!  The Glo Run was a blast, we were covered in glo sticks, Bella and I painted ourselves with black light paint so the black light tunnels were extra cool.  We did this race with a huge group of people and look forward to doing it again next year. 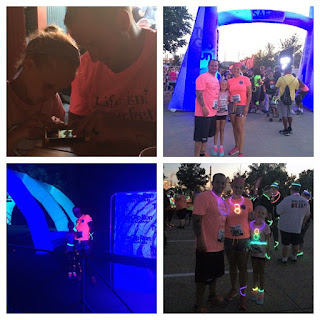 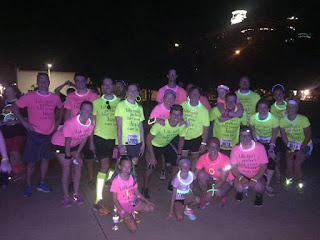 Just a couple of weeks later Bella and I ran the Flood the Run race, which is shorter than a 5k and had a lot of water based obstacles.  We started off going through the "human car wash", there were "snipers" with water guns, water slides, a rain tunnel and a huge slip and slide at the end.  It was a blast, just a fun run for us to do together and we got WET!  Right after that race we had an event at Kosama, Kick Out Cancer where anyone was welcome and rather than pay for a class people just made donations at the door.  All proceeds went to the pediatric oncology patients at the University of Iowa Children's Hospital.  The goal was to raise $500 and we raised $2167.83!!!  It was a wonderful day with so many generous people.  My husband had to do burpees for donations made, not quite sure how it worked because in my opinion he should have had to do one for each dollar raised ;)  Anyway he ended up doing 325 burpees in almost two hours.  Bella and I did kick boxing while Kyle did his burpees :) 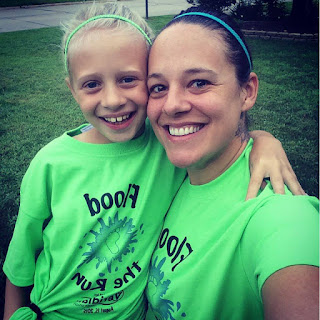 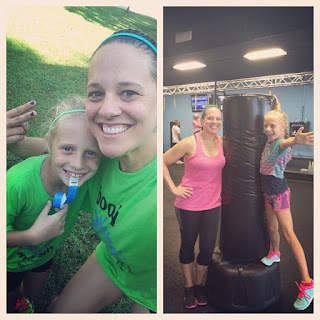 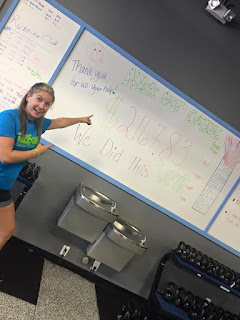 I have been continuing to train for the Newbo Half Marathon, it is a week and a half away.  I've been very active but have not been consistent with my runs.  I feel better conditioned for this race than for my previous half though, hopefully I can meet my goal.  My little brother is running with me, it will be his first half marathon.  My last long run I did was during a weekend away with my best friends from high school.  We stayed at one of my friends sisters' house out in the country.  I ran on gravel roads and had some killer hills, the cows, horses, dogs and gold finches kept me amused, it really was a good run. 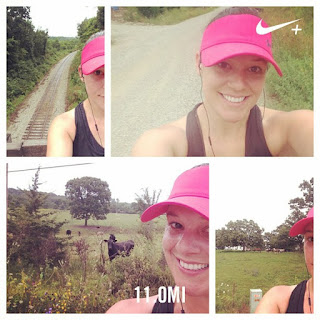 The final session of sand volleyball has begun, I truly can not believe it is our last session :(  Chris and I have improved immensely throughout this season and we are currently undefeated, hopefully it stays that way and we come away with a first place finish in our division to end an awesome season!

Stay fit everyone, summer is ending but I am LOVING the cooler weather!
Posted by Stephanie Griffin at 8:24 AM 35 comments: Links to this post