I ran the Loop the Lake 8k in Des Moines on Saturday with my little brother Larry.  Initially we were a little concerned with how the weather would turn out, we knew it would be chilly and probably windy.  The course went around beautiful Gray's Lake on the paved trails around the lake.

When we picked up our race packets it was funny to find out we were numbers 7 and 8, not sure how that happened when we signed up on different days :)  It was 29 degrees and the winds by the lake were about 16mph, so a bit less windy than my previous runs.  My nerves were settled and I was excited to run, I love the atmosphere of races! 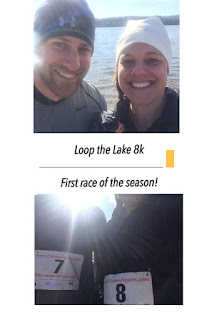 My brother is one that can just go out and run with minimal training.  It takes me a couple of months just to get my base built up so I can feel somewhat good on long runs.  He did run the first two miles with me, then I told him to just take off and go his own pace :) 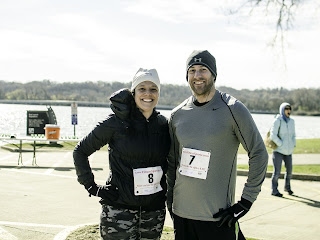 Even though we were on trail paths it wasn't bad because this race didn't have a ton of runners so I never felt crowded.  There were some small hills spread throughout but overall it was a flat course.  My goal was to come in under 55 minutes on the clock.  This was my first run in two months that I actually felt good, how perfect to finally have that on race day!

My official time was 51:34, 10:22/mile :)  I am very happy with how I did and feel like I got some confidence back after this race.  They happened to have the BEST post race drink ever.........chocolate milk!  We plan on adding this race in each year to kick off the season. 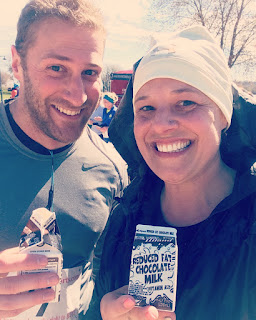 After showering we headed out for some lunch at Jethro's in West Des Moines.  I love this place, they have some of the best BBQ and they had Summer Shandy on tap, it was a great post race celebration :) 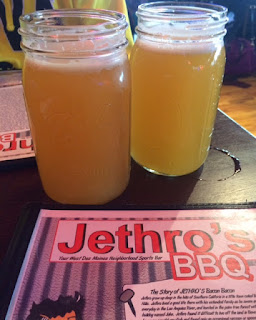 The drive home was tiring but everyone was happy to see me and hear about my run.  Kyle and Bella had a Kick Out Cancer event at Kosama and they had a blast!  Here is a Bella holding a side plank :) 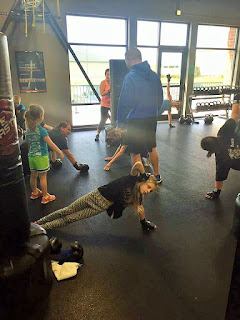 All in all it was a wonderful weekend for all of us.  Yesterday we had thunderstorms so we all enjoyed a movie/game day.  My handsome boy Hurley was happy to have his momma home and didn't leave my side the rest of the weekend :)  He's ready to get in on some of the running action with me! 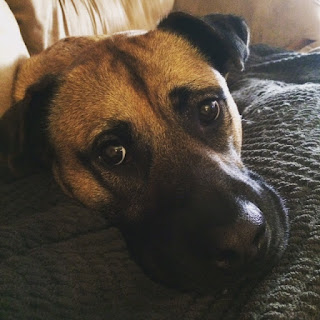 Posted by Stephanie Griffin at 9:35 AM 9 comments: Links to this post 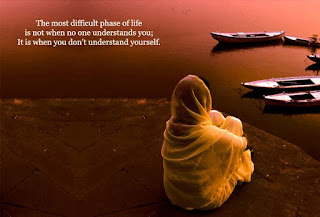 Lately I have found myself in this constant loop of knowing what I want to do but am also feeling pulled in other directions and ending up a bit lost.

My main goal is to build muscle mass for 2017, that is my greatest hearts desire.  Second on my list is to continue running and participating in races, this is proving to be difficult.  Runs have been slow, my body feels heavy and it has been crazy windy here.  I truly do feel like this... 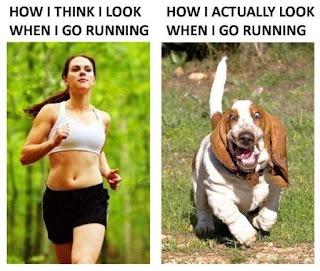 Although that basset hound is dang cute running his little legs off ;)  My first race of the season is Saturday, an 8k which will thankfully not be too bad for me AND it is just two laps around a beautiful lake in Des Moines.  I am running with my brother, well to be honest we are running the same race and he will be far ahead of me :)  And after my run I actually looked like this... 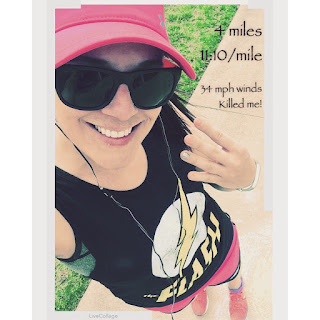 I know it will get easier but this is the roughest start to running I've ever had.  I try to think of all the tips I've read, find inspiration from others because I do know that it WILL get easier and more enjoyable again.

Where I feel pulled in a different directions is with the gym my husband works at.  It is AMAZING, it makes me happy and the people I work out with are incredible!  My dilemma is that although I truly enjoy it there for my own personal goals to work toward competing again, I have to stick with my lifting schedule.  I LOVE lifting heavy and having a very strict schedule when it comes to my lifting days.

So that leaves me with lifting 5-6 days a week, currently running four days a week and hoping to add in a Kosama class once a week.  In my ever working mind I feel I can find balance somehow with all of this.  I just happen to truly enjoy doing way too many things!

Sand volleyball begins on April 24th so that adds in two hours of volleyball on Sundays.  This is by far my favorite sport and I cannot wait to get started!  My sweet Bella also wants us to start doing some family workouts at Kosama on Sundays, which I am THRILLED about.  Oh and she would like to start running with me, but only when I do 2 mile runs, which I really don't so I need to fit that in somewhere.

I get it life is busy, I am in awe of so many people I see accomplishing so many different things.  My sense of organization is not the best, I am working on it but it is hard.

I work a full-time job, that I truly enjoy.  My daughter is in dance, she is ready to start track and any other sport we can get her into.  This leaves me realizing the best plan is to lift in the mornings before work, eventually get that 1-2 mile run in with Bella and our dog Hurley after my lifting.  Leave my longer runs for after work and add in a Kosama class once a week on a non running day.

Life is about living and enjoying it while we can.  Anyone able to pass on some ideas and send me positive vibes of organization is greatly appreciated!  Living healthy and active truly is a joy even if figuring it all out can be a bit stressful at times.  Bella helps me to see that I am doing things right, she supports me and appreciates what I do at home too and so does my husband.  Her little eyes help me stay on track and be truly motivated, I can't wait to start enjoying more of these activities with her. 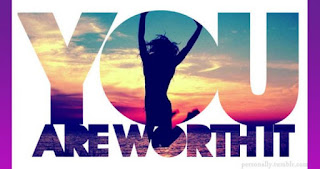 Posted by Stephanie Griffin at 10:31 AM 29 comments: Links to this post